Skip to content
Dancing in Flow® was created by Carolena Nericcio-Bohlman (the creator of American Tribal Style® belly dance and founder of FatChanceBellyDance®) with the class format of “all dance, no talk.”
Join Zena and members of Noa for an hour of just dance. There’s no talking, no instruction, no critique; we get into a groove, give our analytical brains a little holiday, and get some cardio in the process.
Wednesdays, July 10 to 31 (4 weeks), 7:30-8:30
2730 Montague Street, lower level (Kolos studio)
$12 drop-in, or $40 for the full 4 weeks **if registered and paid by June 30**
Bring water. Bring zills if you have them. Non-jingly hip scarves are preferred. You may wish to wear a skirt but it’s not required.

In ATS, as part of our performance makeup we often put markings on our faces that are inspired by facial tattooing traditions from other cultures, especially from North Africa. I can’t speak for any other dance groups, but the markings we use are our own creations — we’re not copying any of these traditions literally. But the markings in the ATS context is what brought me to be curious about traditional facial tattooing.

I’m posting this material as one (geographically broad) example of an authentic facial tattooing tradition. It is emphatically not meant as a source for designs: the women discussed below have more or less uniformly asked that non-Inuit people (especially white folks) not “borrow” (aka steal) the tradition, especially during this nascent resurgence when it’s still a delicate thing — after having been suppressed for decades due to colonialism brought the view that anything that wasn’t Christian was evil.

They were speaking of it as a tattoo tradition — wouldn’t it be OK to use the designs in makeup? Maybe. But that seems like a dick move to me, honouring the literal words while missing the spirit. And a big issue with cultural appropriation is that whatever tradition is bad when the brown people do it but somehow magically OK when white people decide they want to do it. We don’t need to take these designs. Let’s not pick the flowers but just admire them where they grow. So with that caveat…

There’s a revival of Inuit tattooing (tunniit in Canada, kakiornerit in Greenland) going on, including striking facial tattoos for women.

The traditional techniques for tattoos are the same as for stitching skins, and since women did the sewing, women were the ones who were skilled enough to do the tattooing. Women are leading the resurgence in traditional tattooing.

Many different body parts may be tattooed, including fingers, hands, wrists, arms, chest, and back of neck. The hand decorations are vaguely similar to henna patterns, but the designs are made with dots and straight rather than curving lines. Tattoo designs are generally geometric.

Finger markings are for Sassuma Arnaa, Mother of the Sea. [I wonder if this is the same entity as Sedna, a woman who became half woman and half fish. Her fingers were cut off and became the different sea creatures.]

Encircling the thighs is another traditional place and this is associated with childbearing. In some communities, the tradition is that when a baby was born, the first thing it saw was something beautiful (“birthing marks”) to teach them that the world is a beautiful place.

Chin tattoos are called tavlugun in Iñupiaq, talloquteq in Greenlandic language, and represent womanhood. The lines are vertical and may be parallel or may radiate outward at the bottom.

Other designs include a V on the forehead, which may descend to between the eyebrows. This is called qaaq in Greenlandic for Maliina the sun, to shine and overcome.

There may be dashes or dots in a line on the cheekbones, and/or a horizontal line at the temples.

The meaning of tattoos varies among communities.

Alethea always thought traditional tattoos were beautiful and set out to learn about them. She spoke to many Elders and collected their wisdom in her documentary, Tunniit: Retracing the Lines of Inuit Tattoos.

When Marjorie Kunaq Tahbone, of Nome, Alaska (Iñupiaq, Kiowa) graduated from University of Alaska Fairbanks with a degree in Iñupiaq language and Alaska Native Studies, she marked the occasion by getting three black vertical lines tattooed on her chin (using a modern tattoo gun). It’s a traditional tattoo symbolizing womanhood and a coming of age.

After seeing a photo of Kunaq online, Elle Festin, a Filipino-born traditional tattoo artist in LA, reached out to her and offered to teach her the traditional tattooing methods that he had learned. In August 2015 Kunaq flew to LA, where he taught her skin stitching and hand-poke aka stick-and-poke techniques.

Kunaq now has a Master’s degree in Cross-Cultural Studies (2017), having written her thesis on traditional Inuit tattooing. She plans to get a PhD.

Angela Hovak Johnston, originally from Kugluktuk NU but now based in Yellowknife NWT, tattoos using a tattoo machine, as well as the traditional stitch and poke techniques, which she learned from Marjorie.

Hovak has created the Inuit Tattoo Revitalization Project and has travelled to a few communities in the north to help local women get the tattoos and revive the practice.

Hovak also has a book out, Reawakening Our Ancestors’ Lines: Revitalizing Inuit Traditional Tattooing, which won the NorthWords Book of the Year prize 2018. 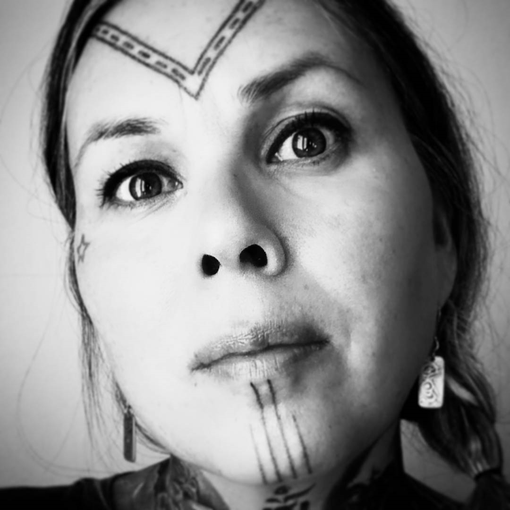 Maya was born in Denmark to a Greenlandic mother and a Danish father and moved to Greenland as a child. As an adult she became a tattooist using a standard mechanical tattoo gun but eventually found it too difficult to use with her fibromyalgia. Then she started working in traditional techniques.

Maya documents her work on her Facebook page, Inuit Tattoo Traditions, and on Instagram (@maya_sialuk). She’s done a great deal of research into the traditional designs, which do not survive in living memory in Greenland (though they do in the Canadian Arctic and Alaska), in an effort to give the patterns back to the people to whom they belong.

American Tribal Style® (or ATS®) looks old but is actually new, having been created by Carolena Nericcio (now Nericcio-Bohlman) in 1987.

ATS® movements are inspired by folkloric dances of the Middle East and India. Aesthetically ATS® is based on the richness of textiles and jewelry from North Africa and India. ATS® is a method of improvisational choreography, using a vocabulary of natural movements and cues allowing the dancers to communicate via gesture and eye contact when dancing together. (From the FatChanceBellyDance® website)

The foundation of ATS is primarily Middle Eastern dance. Moves may be modified from their traditional antecedents to fit in with the ATS group improv format in terms of cues, the number of beats taken up, and angle of the body, among other things

The music, movements and costume come together to create a rich and vibrant look that, despite appearances, doesn’t belong to any traditional culture. ATS is a pastiche of traditional elements, unified and embellished with modern creativity, assembled in the USA a mere 30 years ago and still developing. 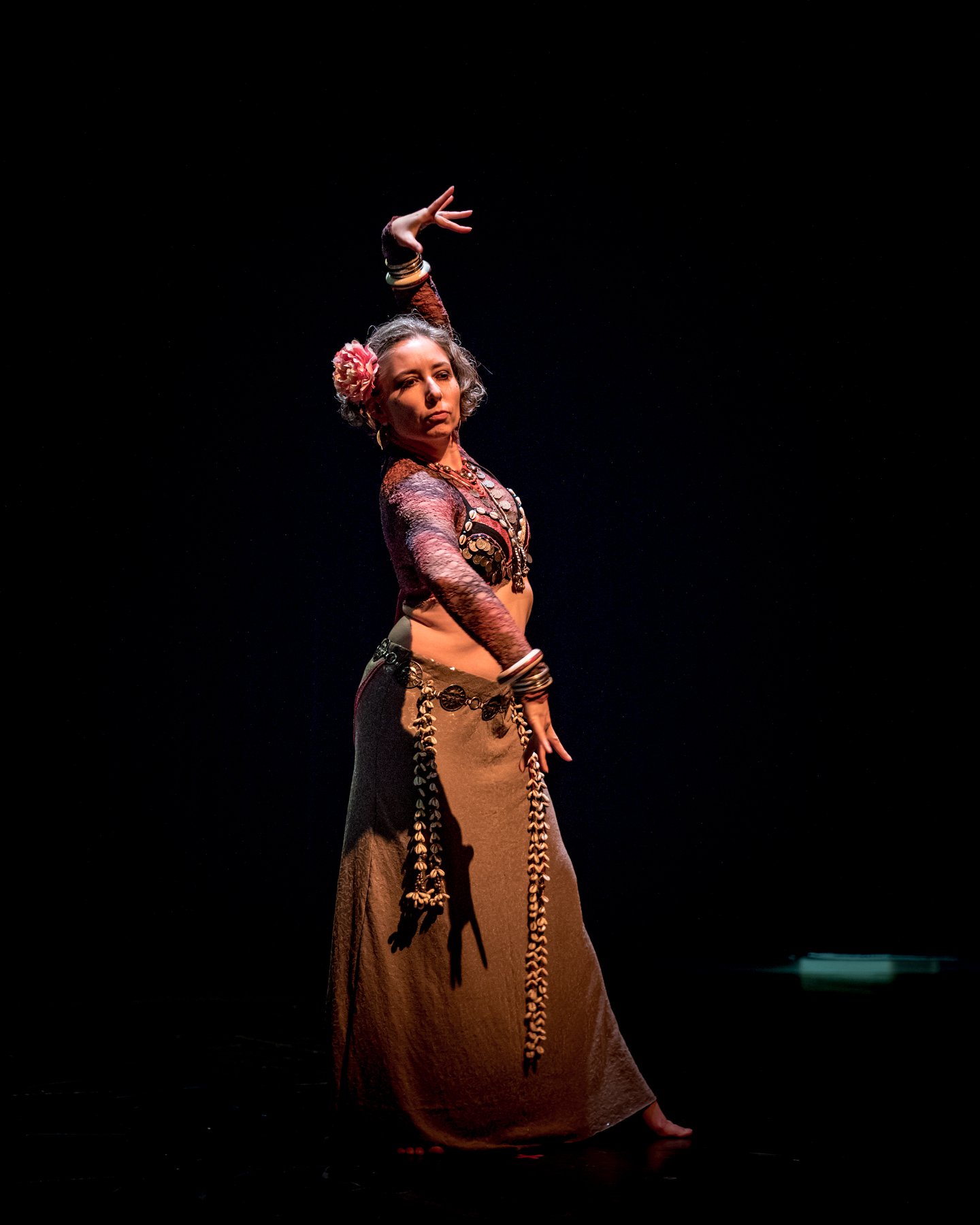